Life on the Watch: Q & A with a security monitoring station operator

Edward Corbett, a Radius central station supervisor, is in charge of Redhanded operations on the night shift. Since most break-ins happen overnight, he sees a lot of apprehensions. We asked him what a typical shift at a security monitoring station is like.

On a typical shift, how many operators are on with you?

We have up to four operators, though more are coming.

How many incidents come up? What do they involve?

It’s difficult to accurately predict how many events might occur on any given night. There are many variables—weather, the season of the year, whether it is a weekday or a weekend, and so forth.

When we do get an incident, it can involve any or all of simple trespassing, wilful property damage or mischief, or an outright theft.

What happens when an alert goes off?

One of us will shout out to the rest that there is someone doing something at one of our sites. I will walk over and look at what they’re seeing, and after asking a few key questions, make a decision as to whether or not to dispatch. The key is whether the behaviour is suspicious.

While the operator is dispatching, I will (if possible) look at Avigilon, which is one of our tools to look at all the cameras at once, and help give a sort of running commentary as to the actions of the suspect. Ideally, we will see police roll up on the suspect and take them into custody.

Afterwards, the operator dispatching will write up a report and include screenshots of the event, and I as the supervisor will pull video to include in the report.

What goes through your head and how do you feel when an alert goes off?

For me, and especially when it’s an overt theft in progress, I get into a kind of singular focus, a sort of tunnel vision. I WANT to stop this person and get them into custody. There’s an inordinate sense of satisfaction in seeing a suspect being arrested and placed in custody, knowing we prevented a theft of potentially thousands of dollars, and perhaps most importantly, sending a message of deterrence out there that the site is not easy pickings.

Do you have one or more favourite incidents?

To date since I joined Radius, I have 82 apprehensions. Two that are similar in scope stand out for me as examples of never giving up hope.

In both these incidents, someone had driven onto a site and was doing something suspicious with the vehicles parked there, enough to warrant a police dispatch. Both these people left before police arrived, but police reported apprehending them a short distance away. 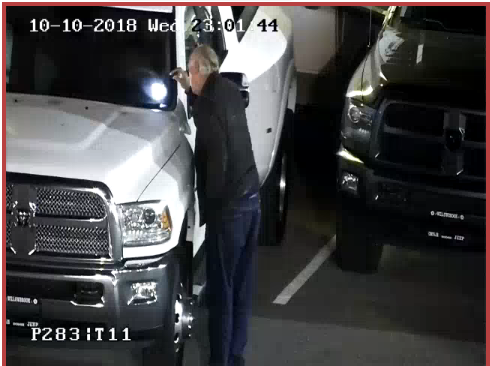 A suspect who left before police arrived, but was apprehended nearby. This is one of two incidents that remind Edward to never give up hope.

What do you do in between incidents?

There’s plenty to do in between incidents—handling residential and commercial alarms, report writing, adjusting cameras, emails, helping to develop and train the staff. There’s rarely a dull moment.

Do you ever get tired or bored in between alarms?

During certain nights where we get a lot of weather triggers, particularly in November and December, the job can become tedious because it seems every trigger has something to do with rain or wind. But you never know when or where something might happen, so it’s important to not fall into complacency.

I like my job in that I feel I make some sort of difference in people’s lives; keeping them safe, keeping their property safe, and so forth. There’s something ultimately very rewarding personally about that.

What would help you do your job better?

One of the things I like about my job is that it marries two of my passions—technology and asset protection. We can always use bigger and better technology in the fight against crime.

Why are you proud of what you do?

My personal belief has always been to make a positive difference, wherever you are. I believe I do here at Radius.

Tell me about your relationship with the police and dispatch.

We always try to be on the best possible terms with all police agencies.

Personally, I was a member of the RCMP Auxiliary program, which meant that I was a sworn peace officer with the same powers as a regular member of the RCMP. While training up to and during this appointment, I familiarized myself quite closely with police dispatch and radio procedures, and feel I know what the police dispatchers will ask for and in what way they accept information. I think this is a big advantage.

Working in such a dynamic environment is definitely not for the faint of heart. It demands a lot from us but the rewards are numerous. I am very honoured to be part of such a diverse team and providing these kinds of next-level services for our clients.