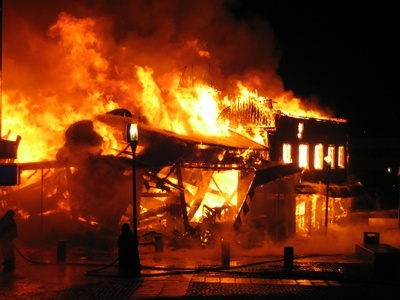 In the wake of these massive fires, firefighters are warning of the risks of wood construction. While wood is more economical than concrete, it is also more vulnerable to fire before construction is completed. In jurisdictions which don’t require compartmentalized construction, fires spread quickly through open wood-frame structures. Moreover, even when sprinkler systems and valves have been installed, most jurisdictions do not require them to be active until close to occupancy.

So, how do you prevent fires at wood-frame construction projects and minimize any damage? As with all fire prevention, it starts with a fire safety plan. If fire protection systems are in place, activate them. In the Maryland fire, closed valves in the standpipes made it difficult for firefighters to deliver water. In the Kelowna fire, sprinklers had been installed, but not turned on.

At the Emeryville project, the developer installed 14 surveillance cameras and two security guards after the first time the development burned down. It wasn’t enough. An arsonist started another fire in the same place, at the same point during construction—with the same results. A wood-frame building under construction will likely be lost if you do not respond within three to four minutes.

So, from a security perspective, what are your best options? Read our next blog to find out.